I almost left alone.  Craving a solitary morning hunt, a quiet cup of coffee, misanthropic daydreams beside a fire.  Silence and stars.

I could have gone alone.

But what good would that have done her?

Be a dad, Dad.  Step up.  Create an experience she’ll remember.

Yes, it’ll take longer to pack.  Yes, there will be complaints, questions about how much further we’re walking.  No, I will not be able to maintain the same mileage goals.  The morning hunt will be cut short so I can get back to the tent before she wakes.  She’s a pretty cheerful backpacker and generally easy kid, but taking children complicates things to a degree, now matter how competent those children are.  This is not regret or some sort of lament, it is a simple reality that every parent understands.  But if we let that complication lead to avoidance of sharing experiences and doing things with them, we have failed them.  Utterly.  As much as I need to be out there alone, I need to take them out with me.  It’s a fine line.

Her enthusiasm to do a trip with me is all the reason I need.

So we drive together.  I am so happy that she prefers Alt-J to One Direction, PJ Harvey to Selena Gomez.  It’s something we’ve done right.

And we walk together, cycling through 10 year old mood swings, going from “my feet are tired” and dragging along like the world will end…to suddenly “Snow!!!” and running ahead without a care.  I can only smile, be patient.

For the past 15 years my mother has given me  a whistle for Christmas.  In her mind it will keep me safe in the woods.  Perhaps she forgets that she’s given me a few dozen of them, as well as a far more useful PLB.  No matter.  On this trip my daughter carries the newest whistle around her neck with pride, blowing it whenever I need to stop and wait or hurry up or fetch something.  I know this might sound insane to one that doesn’t like children, but we’re having fun with this.  Cooking tea, cooking soup, making beds, tending needs.  There was little silence on this trip.  There was little solitary philosophizing while staring at the sky.  But there was much watching her.

I managed a 45 minute hunt in predawn light before she woke, creeping through scrub with burning cold fingers, taking note of deer trails for next season, never seeing a single cottontail.  It’s interesting how rabbits are everywhere when you’re not armed and looking for them.

The whistle blows in the distance.  I smile, shaking my head, heading back to cook up a pot of water for tea and morning coffee. 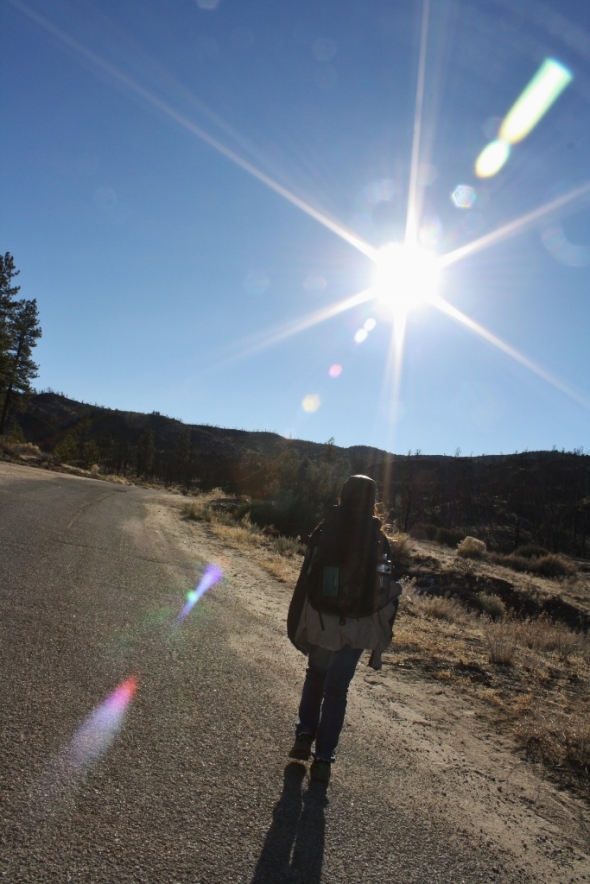 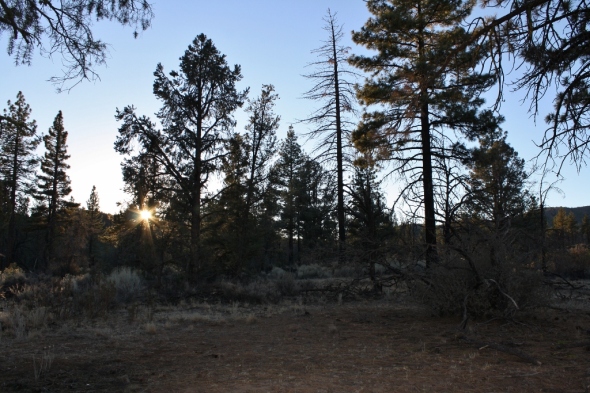 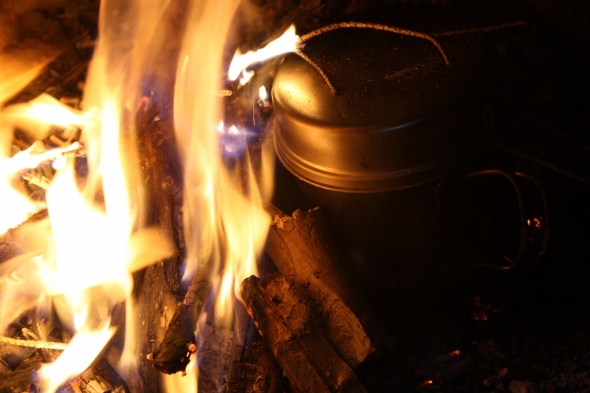 I’ve been thinking quite a bit lately about a more sustainable backpacking ethic. Part of that involves not buying/consuming goods to be able to make trips happen; eating whatever I have at home, not buying fuel canisters, avoiding the disposable. I think woodfire cooking (where appropriate) is a small but important part of that. 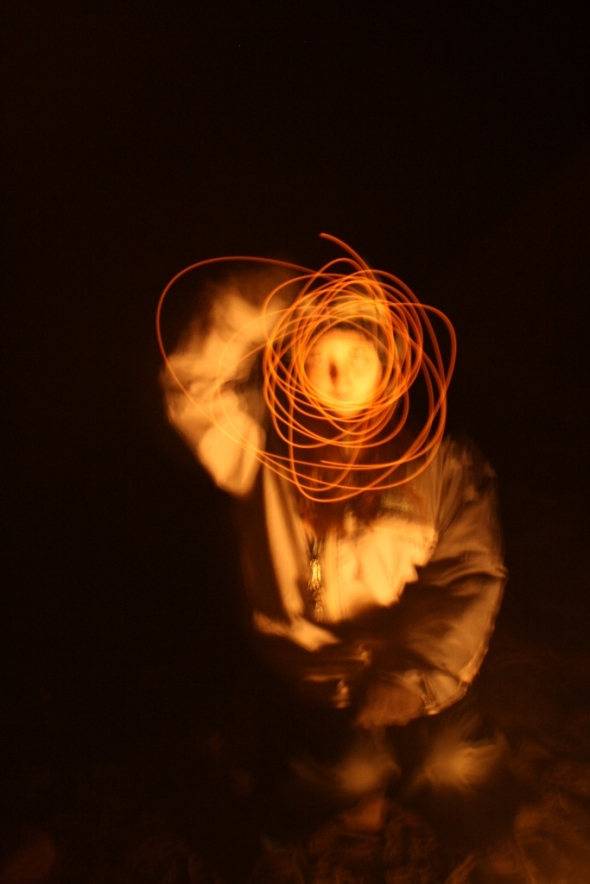 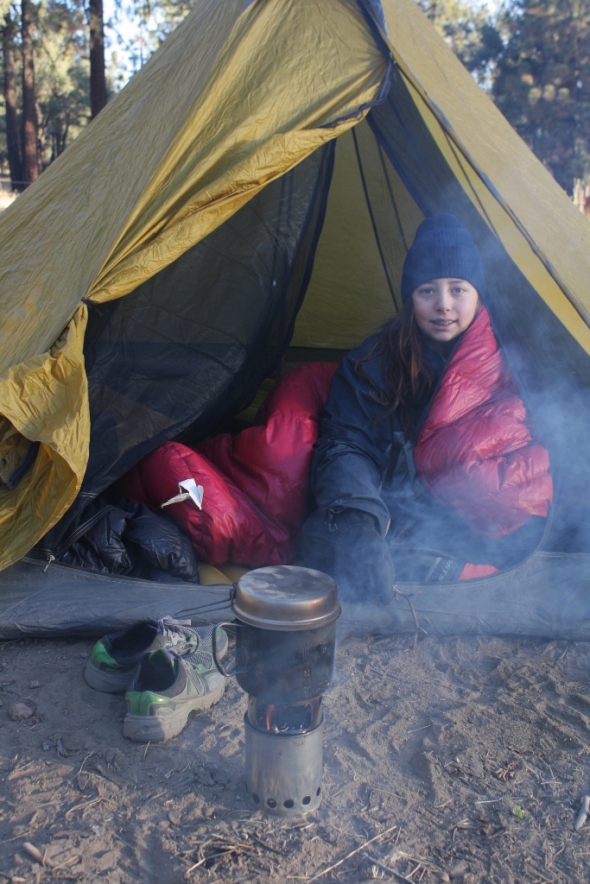 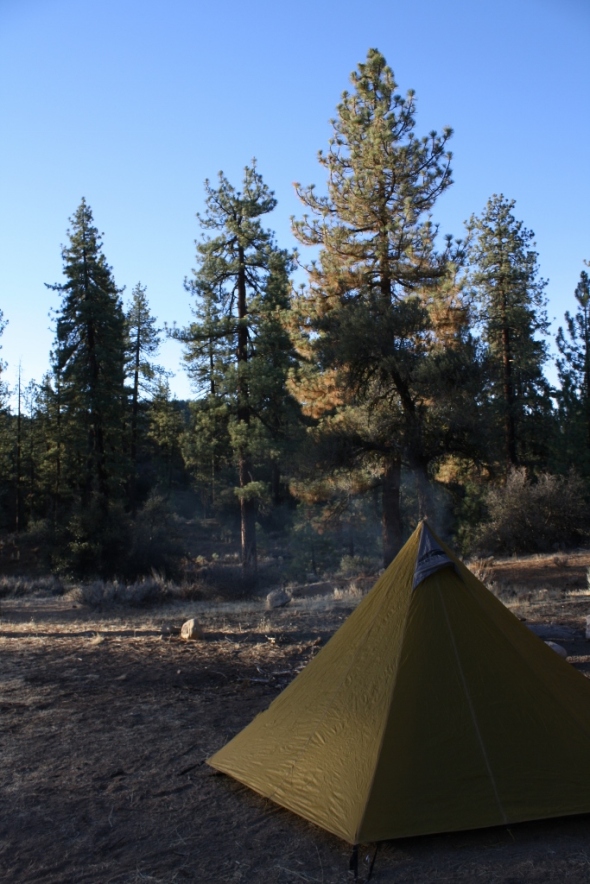 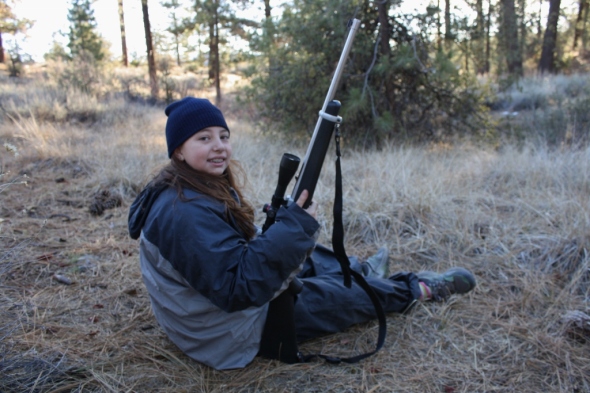 She received her first hands-on safety and operation lesson on this trip. I did the same thing at the same spot with my son when he was her age a few years ago. She’s certainly mature enough now to shoot with supervision.

The entire reason I dyed the Catalyst black was to color coordinate with the 10/22. A highly important gear consideration.

Breaking trail in fresh snow from Dawson Saddle to the summit with my good ol’ buddy Sr. Lopez.  ~10 miles and 2500′ of gain, the “run” took a slightly unexpected turn and became a 6 hour postholing fest.  A little gear testing was done, namely NRS Hydroskins as snow socks.  I wore some lightweight Smartwool liners underneath and did relatively well given the time out there.  A great day in the mountains. 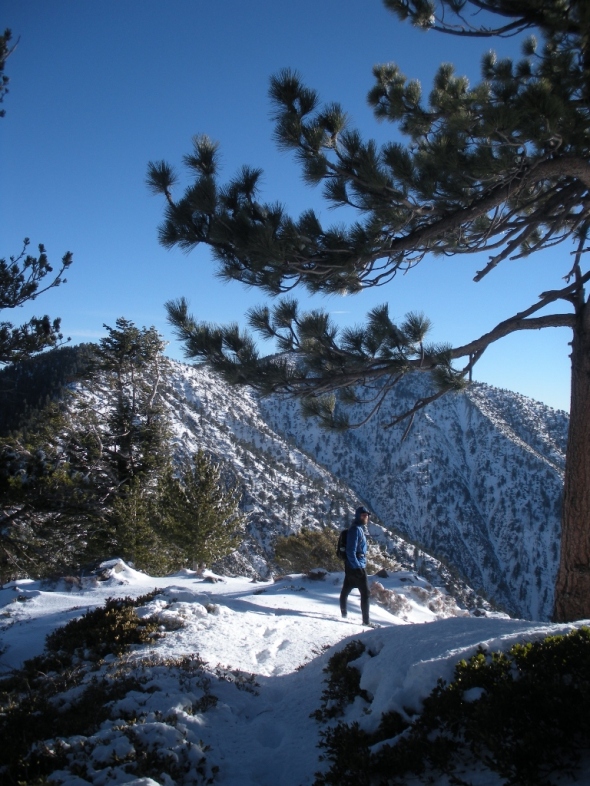 It’s Senior Class portrait day and I have dutifully escorted my class to the field for an hour of trying to get everyone to sit down, stop dancing or wrestling, and be still long enough for a single photo.  Nallely is a lone Freshman that somehow ended up in my class.  She stands awkwardly on the field beside me, slightly pigeon toed in Converse All Star high tops.  I squint, trying to shield my face from the sun with a cupped hand.  In moments like this I would just as soon not talk, feeling no pressure to join my co-workers off by a fence.  I take up residency against a light post.

Nallely is looking at me.  I decide a slight smile in her direction will suffice.  She breaks the silence.

“I don’t know what to do.” she says, her thick El Salvadorian accent forcing me to strain to make sure I hear her right.  She has not been here long.

“About what?”  I respond.  Not knowing what to do can be a dilemma of unfathomable proportions, especially when those words are spoken by a teenager.  I brace myself for the answer.

“I change my mind a lot too.” I reassure.  “I think it’s okay.  There’s no hurry to know what you like.”  I’m straining for cues as to which direction this conversation is going to turn.

Nallely stares down still, stirring a circle in the dirt with her toe.  She’s stiff, arms crossed, afraid to make eye contact.  I sense that she doesn’t speak freely with adults very often but has decided she can confide something in me.  I believe this trust began when I once noticed she was wearing a Nirvana shirt and told her I saw them play.  I stare across the track, unsure if I really want to commit to this conversation, though it looks like I will have no choice.  Moments like this bring a degree of trepidation, when students seem to be latching on a little too quickly, eager to share something.  I worry I’ll be told something I’m going to have to report, something that will cause me to break the trust that a student believes they can risk on me.

I worry about who she’s about to say hates her.

“They don’t even know me, but they make up things about me.”

She’s struggling to explain herself, searching for the right words.  I realize with a certain degree of relief she’s speaking about other students here, not parents or family.

“I’m sorry they’re like that.” I say, making my clumsy attempt to comfort her.  “The best thing you can do is not let them get to you.  Ignore them, don’t let them close”

“Does it get better?” she asks.

I hope so?  That’s the best I can muster?  I quickly correct myself.

“It gets better.” I reassure.

“In four years.” she says, looking me straight in the eye for the first time in our conversation, almost finishing my sentence for me.  She catches me off guard.  I can’t tell if it’s sarcasm or an honest statement, but she might as well have told me to stop lying to her.

“Things will be different when you leave.”  I say.

“In four years.” she say, a slight smirk on her face now, foot still restlessly tapping in the dirt.

I can’t seem to find an answer for her.  There is no answer for her.  She knows it.  I can see that her eyes carry an unspoken weight.  I look out across the field again, insignificant in the sun.  What if I said that this was it, that for some people it does not get better?  But I don’t have to.  I can see that she already knows.  She simply needed to see if I knew too.  I watch the seagulls picking over the grass.

“Would you like to eat lunch in my room tomorrow?  We could talk.”

She silently nods, more of a vague acknowledgment than an answer.

I watch Nallely walk across the field, over the blacktop, disappearing amongst the buildings on the other side.  I’m still squinting, uncomfortable.  I watch my fellow teachers laughing, gesturing.  The students are chanting something as the photographer yells at them with a megaphone from atop a ladder.  I sit down in the meager shade of the pole, dig through my pockets for something to write on, wondering how badly I failed her or whether she really needed me at all.

Twenty degrees beneath a diamond-cutter sky

weaving in and out of conversation and silence

Sometimes you find nothing.

while walking alone away from the fire 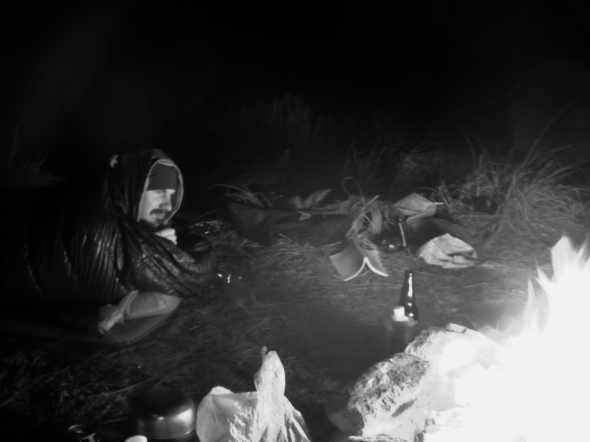 deerskin gloves, the shouldering of a rifle.

The low groaning of an unseen bear drifts through the trees

-I drift slowly through the scrub.

darting in and out of brush

and the sun’s first beams piercing the canopy.

leading into a small ravine, beneath the woodpile of a fallen tree.

Pupils wide, I make my approach

and my mind returning once again,

suddenly aware of itself. 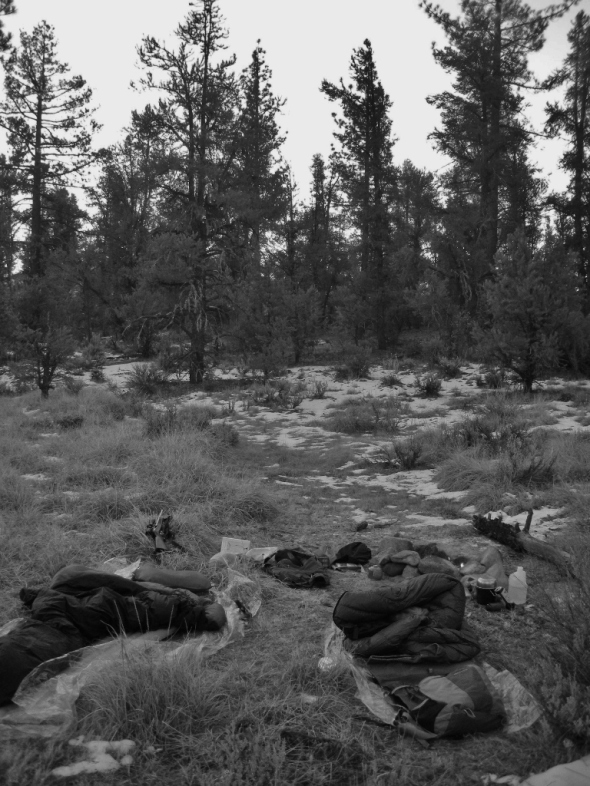 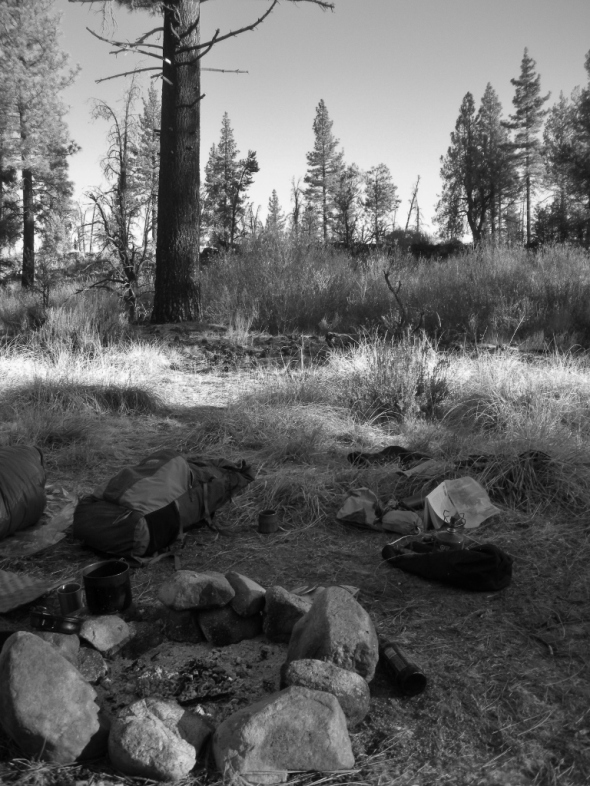 Poem for My Fly

After thirty seven winters upon this Earth-

I can recite the classics, name the mountains

but more often than not, now

I have forgotten to zip my fly.

I needed a pair of insulated pants for sitting still while hunting, sitting around camp, and sleeping in winter.

I was looking to pick up a pair of Montbell Thermawrap Pants or similar but found these liners at the surplus store for $9. Absolutely worth trying them as a project at that price.

When I was poorer and less fashionably geared up, I hiked the Sierra for many years using an army jacket liner for lightweight upper body insulation. PAired with a base layer and a windshell, it worked great. Now having a Montbell Thermawrap jacket, there’s not much difference save for better sizing and a proper cut with features.

I figured the pants can’t be much different than the Thermawrap version either.

The awkward thing about the liner pants is that they’re very baggy, have no way of tightening in the waist (as they’re meant to button into pants), have a gigantic gaping fly, and are cut short (so as to not be long enough to interfere with boots I assume).

All of these things are easily remedied:
1. Remove button and bar-tack them shut above the fly.
2. Add velcro to the fly. Yeah, there was that ridiculous thread about flies…I like them. Especially during winter when wearing a belt and/or suspenders.
3. Sew in a strip of nylon around the waist to house a drawstring with cordlock (that’s the black band in my photos)
4. Sew in velcro tabs at ankles to cinch them tighter

I was considering tapering the legs and taking some fabric out but left them baggy so they can be comfortably worn over or under pants. The ankles are wide enough to get on over boots. I might go back and sew in a giant nylon butt patch for sitting in the event I wear them over my pants (such as stopping and sitting for 30 minutes while hunting). 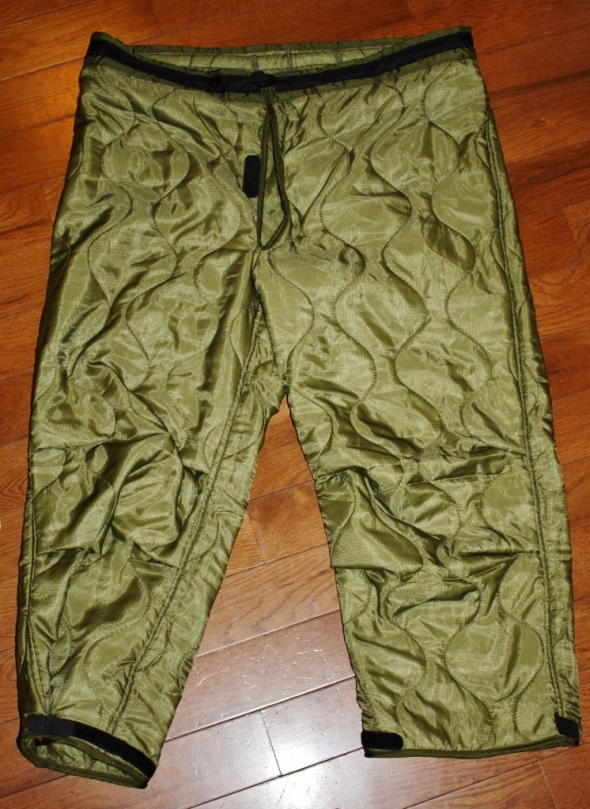