Simple.  Quiet.  I appreciate the character of trips with my children.  We talk, we leave each other alone.  I watch.  These moments without clocks and worldly nonsense offer time to pause and look at who they have become, who they are becoming.  The beauty of family, those whom we can be quiet with- because we know there is time.  Gary Snyder always comes to mind here.  I’ve probably already posted this poem somewhere, but it begs repeating, often.

The rising hills, the slopes,
of statistics
lie before us.
the steep climb
of everything, going up,
up, as we all
go down.

In the next century
or the one beyond that,
they say,
are valleys, pastures,
we can meet there in peace
if we make it.

To climb these coming crests
one word to you, to
you and your children:

A sense of melancholy always grips me after returning from trips with family; a sense that what I have just been partaking in was the real world, that these are the only people I need, that it is the way things were meant to be.

So we just have to keep on going.

He wanted to try Chef Boyardee canned ravioli for his first time and I forgot the can opener. Knives and rocks work. Thankfully, he hated the ravioli. I warned him. 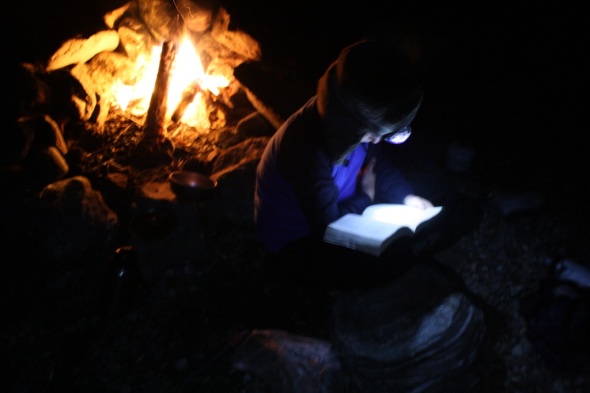 Lovecraft’s “The Call of Cthulu”. I’m happy to have raised a bookworm.

He still hasn’t beaten me, but this one was close. Somehow down a rook, knight, and two pawns, I managed to force a draw to save my skin. 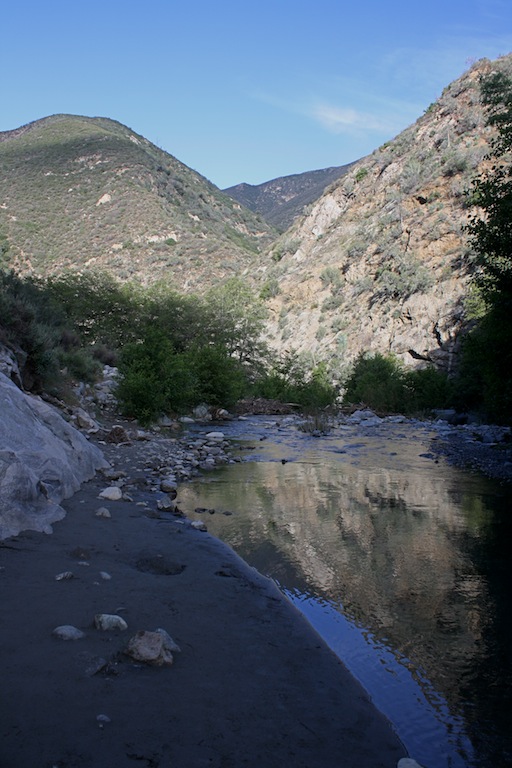 An average morning surfing a local jetty with John before work- I catch a glimpse in the distance of a tail breaking the water’s surface, soon after a spout blows.

A pod is congregating about a quarter mile away on our 10 o’clock.

Another surface breech, this time I see a pectoral fin as the whale rolls.

The whales are now drifting closer, perhaps 200 meters away.  We catch a good look at one, its massive head and back, and are pretty certain they’re Humpbacks.  There appear to be at least half a dozen of varying sizes, a family, all moving slowly north.  Pre-dawn fishermen and beach walkers are beginning to congregate on the sand to look.

Within a few minutes, the pod is now directly in front of us, about 100 meters deep.  We decide to swim outside to get a better look, not expecting them to actually be there when we get out.

But the whales hold, seemingly waiting for us, massive shapes lurking below the surface.  Small boils, ripples, and turbulence on the surface give away their locations.

They’re getting very close.  We sit on our boards, watching, slightly nervous.

Without warning, the largest whale slowly  breaks the surface, a smaller one beside it, lumpy black-grey backs parting the water.  The largest is easily over eight feet wide.  They’re less than 10 meters away and headed right for us.  There’s a mix of laughter, amazement, and a background fear that we’re too close.  The massive bodies then dip and silently disappear below the surface.  They’re somewhere in the deep under us.  One then surfaces not far from John.  Another appears behind me.  Again they disappear.  Most stay under, sending ripples and small wakes around us.  We’re fully surrounded, apparently being investigated, and we’re completely exhilarated, yelling at each other in disbelief, craning our necks to figure out where they are.  We’ve been gifted by the presence of swimming giants, powerful yet gentle beasts seemingly expressing nothing but curiosity towards us.

The background information and cast of characters on this trip are well explained by Jacob on his blog post, Hike It. Like It: Traversing Zion.

Adan and I did Keyhole Canyon on our first day, a great easy introduction to slots and swimming.  I fully intend to get the kids into this one with me this summer.  The rappels are straightforward and I could lower them if necessary.  Temps should be better as well; I lost feeling in my feet within 45 minutes of getting in the water.

Photo conditions are difficult; all of these canyons were far darker than they appear here.  All of my photos were taken on a GoPro Hero HD without the ability to adjust the shutter speed or exposure so some blurriness ensued…

Canyoneering is too much fun.  Needless to say, it looks like we’re both hooked.  Plans for bigger, better, and harder canyons are already in the works and a new rope is in the mail.  While I’m pretty well versed in rock climbing and climbing anchors, this is a new application of some of those skills that I’m excited to explore. 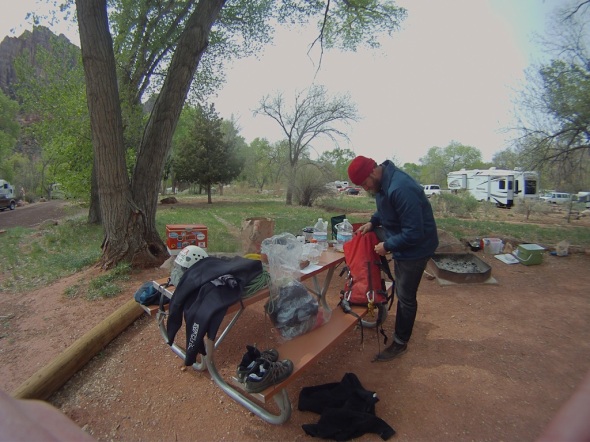 Gearing up and over geared. Going by the books, we carried more than necessary. Knowing what I know now, this canyon can be done with a harness and 60′ of rope. Maybe a sling and a link as backups. 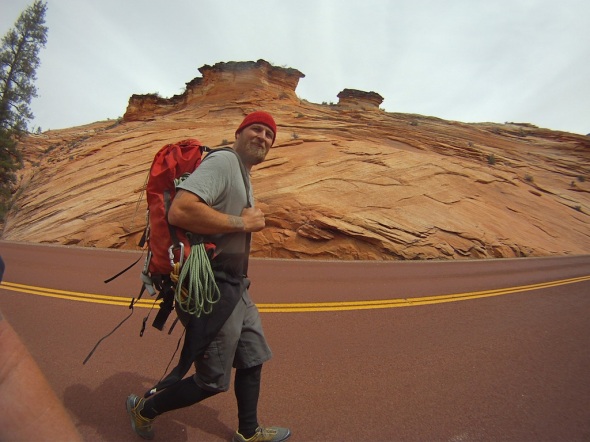 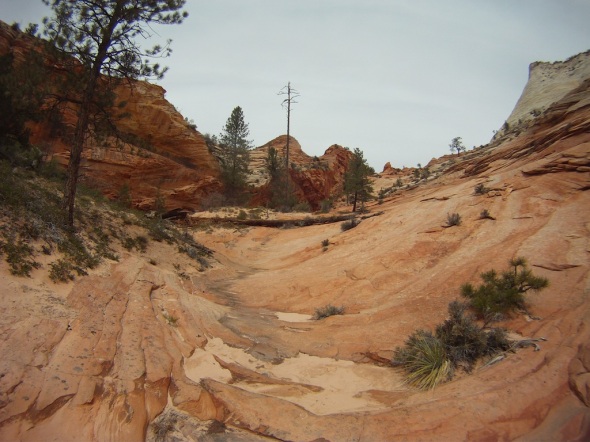 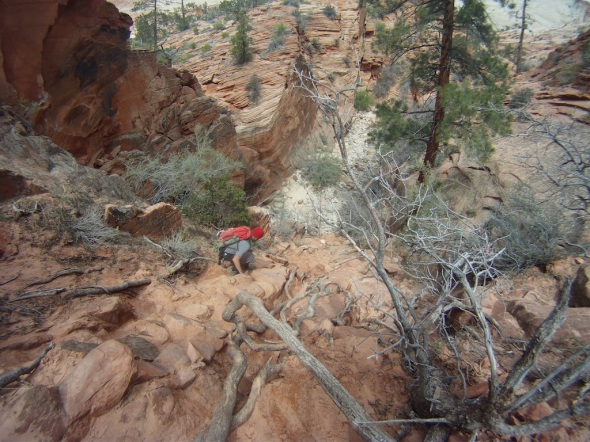 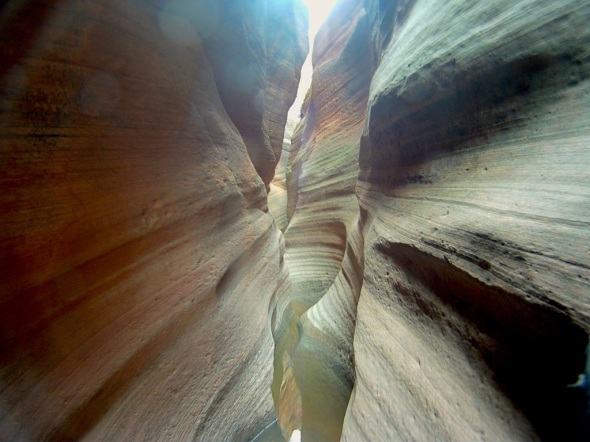 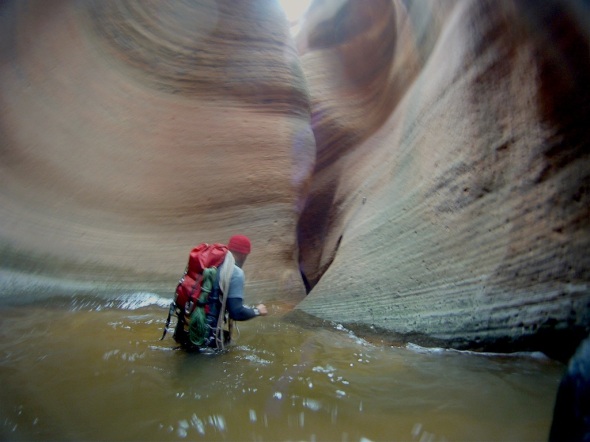 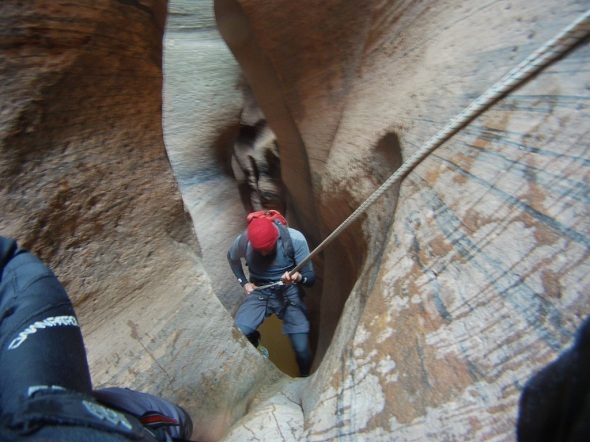 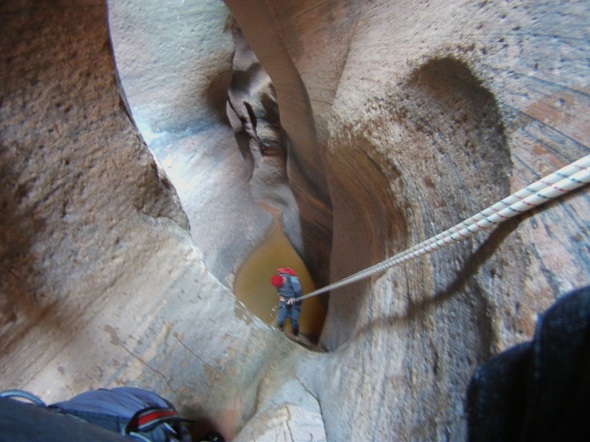 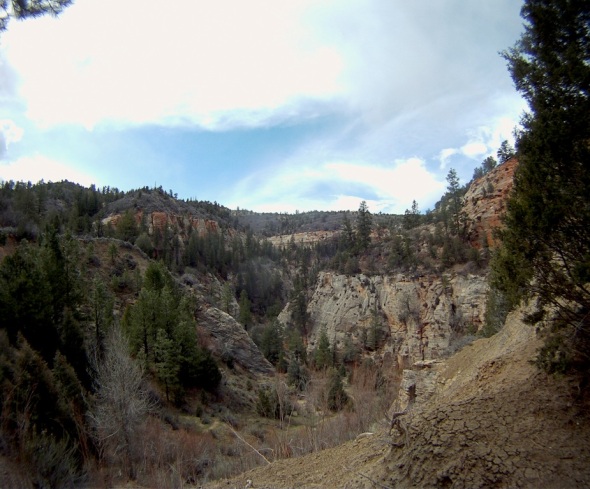 This hike was a lot of fun. ~12 miles, we finished it in about 6 hours.  More of a hike than a technical canyon, no serious rappelling was involved and most of it could have been downclimbed if you wanted to.  We had a blast in the lower half throwing our packs off of ledges and taking some good jumps and swims.  This sort of travel definitely makes you think about the robustness of your gear. 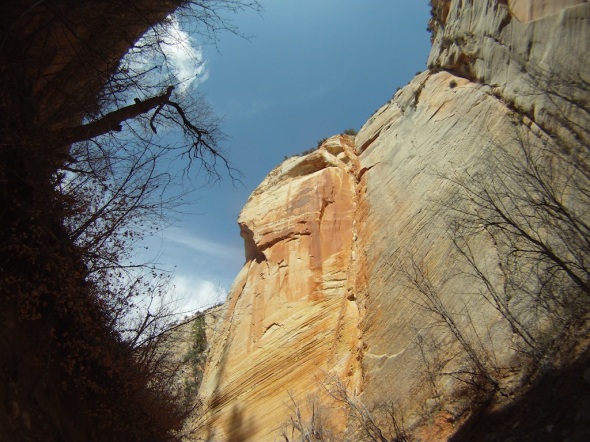 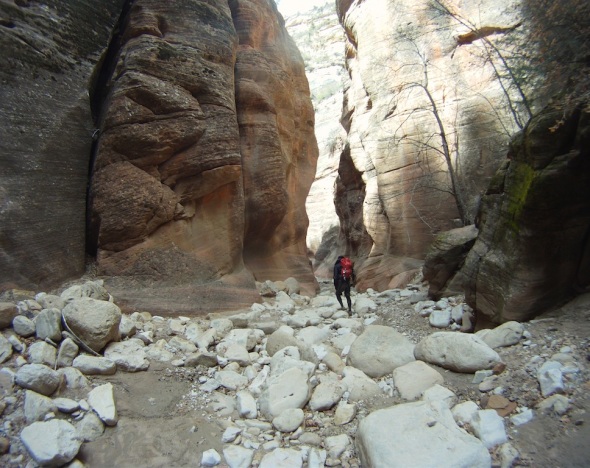