With daytime temperatures at 100+, clear, washed out skies, and nights at over 70, summer is upon us in Southern California.  I hate it, the days anyway, but it does make packing easy.  For short trips in the local foothills, a simple, hot-weather sleep system is in order.  (Excuse the stock photos, I’m a lazy photographer.) 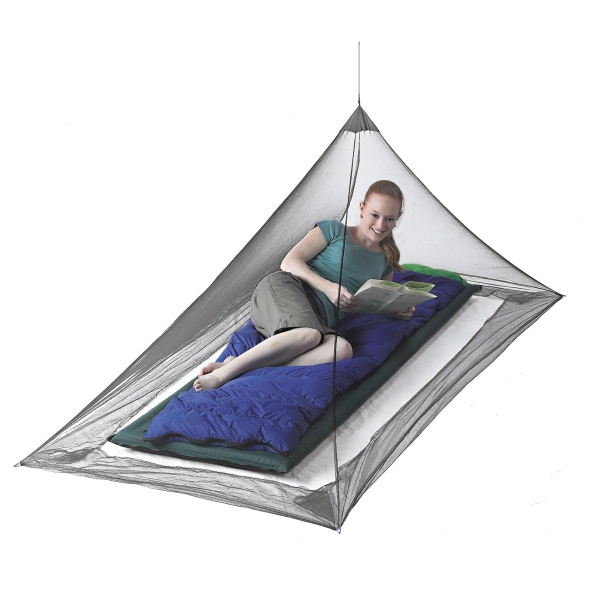 Sea To Summit Nano Mosquito Pyramid Net.  About $50 shipped from anywhere.  2.9 oz., stuffs super tiny, very roomy and airy if you stake it out.  Tie it off to a tree, use branches, or cross a pair of trekking poles.  Combine it with a sized tyvek or polycryo ground sheet (Duck Brand window insulation from the hardware store)  that overlaps the perimeter skirt and you’re covered.  Skip the groundsheet if not worried about crawlers or dirt.  Either way, it’s a sub 6 ounce shelter, including 4 light stakes and some string.

Z Lite Original Pad.  I like closed cell foam pads in hot weather better than softer, inflatable pads.  Because it’s firmer and you don’t sink in, they don’t feel as sweaty. 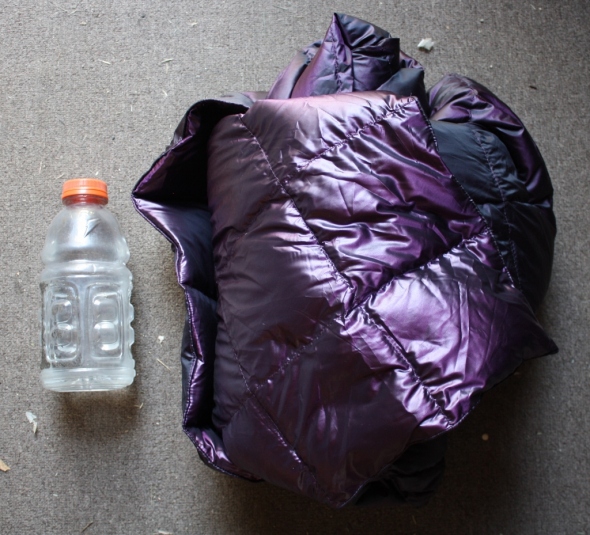 These three items create a small-packing, excellent warm-weather sleep and shelter system for less than $100 and 3 pounds combined.  With a sewing machine you can easily add a drawcord footbox to the down throw for a little more sophistication.

You can feel it in the air, even at sunrise, that the day will be searing.  A bad case of insomnia the night before, I roll into Fast Eddy’s driveway at 6AM, hoping for a coffee refill, greeted by the sound of a million roosters in the surrounding neighborhood.  A mix of canyoneering and riverboarding gear sprawled across the dirt driveway, I’ve always admired Eddy’s style.  I immediately notice that his sleeping pad is an old vinyl, foam-filled workout pad from a 70s or 80s P.E. class, printed with stretching diagrams.  His water is packed in 1 gallon, screw-top glass jars placed inside cardboard boxes.  I can always count on Eddy, who gets out as much or more than any adventurer I know, to humble me with his gear choices.  Every trip with him that begins with me thinking I need a new piece of gear ends in certainty that, with a little more duct tape, I can put the money towards gas and another outing instead.

We drive, winding up the Kern River, Eddy regaling me with whitewater feats, stopping the car occasionally to show me famous rapids and waterfalls.  As his excitement spills forth, my stomach turns while staring into roaring, churning chutes of water through rocks.  I reassure myself that he knows I’m new to this, that hopefully we won’t be running anything like what I’m seeing.  But I’m not so sure.  I can’t help but dwell on the fact that getting pinned under a rock or knocked unconscious and drowning just looks so easy.

Settling on doing the Limestone run, from Johnsondale Bridge to the dam, we manage to finagle a shuttle with some rafters up the canyon.  Loading our gear into their trailer, I see some of it for the first time; baseball catcher knee and shin guards, elbow pads, PFDs, a roll of duct tape.  It looks like it’s going to be an interesting day.

The put-in at the bridge is teeming with rafters and kayakers.  We are the only riverboarders.  We definitely catch quite a few sideways glances from the boaters as we carry what essentially amount to thick, overbuilt boogeyboards with handles down to the water.  Putting on our wetsuits and helmets at the water’s edge, a kayaker spots us.

It’s an older friend of his.  Immediately, tales of whitewater feats and the old days start to flow.  More kayaks start to gather.  Eddy is introduced among the younger with an almost royal status, having done, from what I can gather, just about every major rapid and waterfall on the river during the most extreme flow rates.  I’m assured by JB, an old veteran, than I have the best teacher there is on the Kern and I’m in for a treat.

We finish reinforcing our pads with duct tape, put on our fins, and hop in.

Now I’m completely new to whitewater, but I can immediately glean that while kayaks and rafts tend to flow over most waves, on a riverboard, you tend to go through them, all of them, head first.  You have to be comfortable holding your breath.  A lot.  And where you might slide over rocks in a boat, on a riverboard you bump and drag your body across them.  Keeping your legs high and on the surface is paramount to avoiding getting completely battered, let alone stuck and drowned.  Needless to say, it’s a pretty wild and fun ride.  On Limestone Rapids I got caught in a current and took a bad line, got pinned against a boulder, and started to get dragged under.  I freed myself by rolling off upside down and to the right, getting sucked down a small drop head first and on my back.  Eddy watched, complementing me on making a good move to get out of a bad situation.  I have to wonder about a sport where going down a rocky chute head first and on your back is a “good move”.  The turbulence of the water is also very different from a surfing wipeout.  As opposed to an explosion of force, there’s the strange and uncomfortable feeling of it wanting to hold you and steadily pull you down.

But it’s a blast.  I fully understand the appeal vs. kayaks and rafts.  Simplicity of technique and intimacy with your surroundings.  As opposed to being on the water, you’re fully in the water.  At class III and IV, the day feels comfortable and well within my ability, a good introduction.

And Fast Eddy is already texting about the next trip.  Higher flows and bigger water are being predicted for next weekend and he’s itching to take me off a 15′ waterfall.  Hmm.

I took no pictures on this trip, but here’s a video of Eddy running Upper Salmon Falls for some perspective.

The Answer by Robinson Jeffers, published 1936.

Then what is the answer?- Not to be deluded by dreams.
To know that great civilizations have broken down into violence,
and their tyrants come, many times before.
When open violence appears, to avoid it with honor or choose
the least ugly faction; these evils are essential.
To keep one’s own integrity, be merciful and uncorrupted
and not wish for evil; and not be duped
By dreams of universal justice or happiness. These dreams will
not be fulfilled.
To know this, and know that however ugly the parts appear
the whole remains beautiful. A severed hand
Is an ugly thing and man dissevered from the earth and stars
and his history… for contemplation or in fact…
Often appears atrociously ugly. Integrity is wholeness,
the greatest beauty is
Organic wholeness, the wholeness of life and things, the divine beauty
of the universe. Love that, not man
Apart from that, or else you will share man’s pitiful confusions,
or drown in despair when his days darken.

The convenience of cool temps and cloudy skies is just about over and I find myself reevaluating my sun protection systems.  Sun protection, especially at altitude or in the deserts, has the potential to quickly make or break a trip and should be considered very carefully.  Getting older and taking preventative measures like having suspicious moles and sunspots burnt off by a dermatologist is testament to the importance of being smart in this area.  While I love being relatively unclothed in the outdoors, slathering on sunscreen all day long is increasingly unappealing.  It’s messy, attracts dirt and grime, and soils all of your gear and sleeping bags on extended trips.  In addition, in places like the High Sierra, with small and pristine water sources full of life, I question the ethics of getting into a small pool or stream for a bath when you’ve been slathering yourself in chemical oils all day long.  It just doesn’t feel right; these places are special enough to me that I want have as minimal an impact as possible. 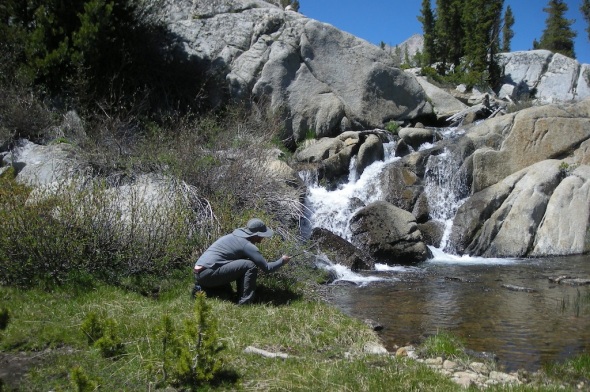 Fishing the Upper Kern.  Temps approached 100 many times on this trip.  6 days straight of these conditions, all over 10,000 feet, is not something to mess around with.

My system on last summer’s trip into the Upper Kern with Tom proved to be the best I’ve used for extended full sun exposure to-date.  I don’t believe I used more than a dime-sized drop of sunscreen on the entire trip, just a little for the backs of my hands and my nose.  Both of which are small enough areas they can be washed off well away from water sources.  I believe with slightly more precaution, I could eliminate the use of sunscreen altogether and plan on trying to do so on this year’s upcoming trip into the high country.

Here’s what I’m using so far: 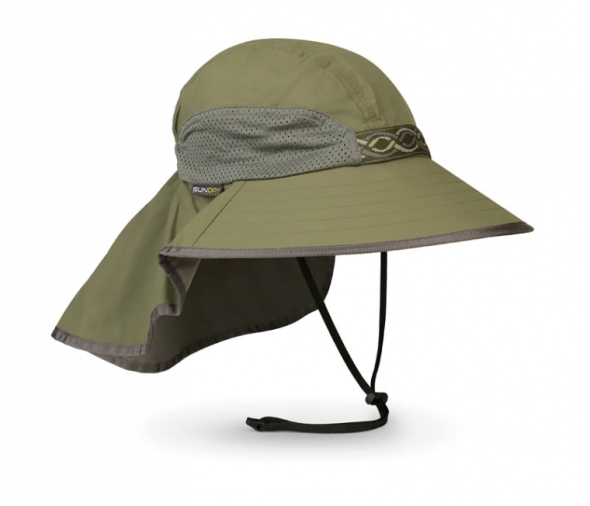 My beloved man-bonnet.  Most people hate them based on sight.  In certain conditions they’re too much (bushwhacking, hunting, or anything technical), but for backpacking the high country or deserts it’s proven to be one of the most functional pieces of gear I own.  It allows me to go out without using a drop of sunscreen on my neck, ears, or face, and that’s worth something.  The black under the brim shades the world nicely, especially at 10,000+ feet, and I’ve found it to be far more secure than you’d imagine in wind.  In addition, I think it’s the coolest hat I own; plenty of air flow and it dries quickly.  I know people can’t stand the look of them, but if you’re worried about fashion over practicality in the mountains, I suggest you check your premise. 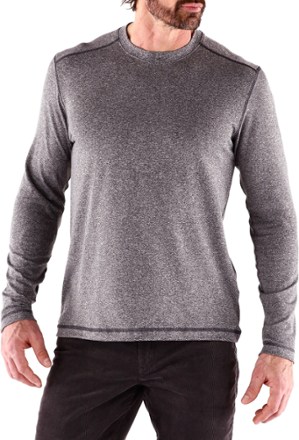 The SPF 50+ seems legit, as I’ve shown absolutely no signs of sun exposure through this shirt, even after weeks at over 10,000 feet and full sun.  It breathes well enough, even at 90+ degrees, doesn’t seem to stink as bad as other synthetics I own, dries quickly, and has a good enough feel against the skin (some synthetics feel too plastic-like and sticky).  This year I plan on slitting some thumb loops into the sleeves so I can pull it down for back of the hand protection, an area I neglected and burned last year.  So far it’s been good enough and durable enough.  While merino wool feels better on the skin, the price and the durability aren’t worth it to me. 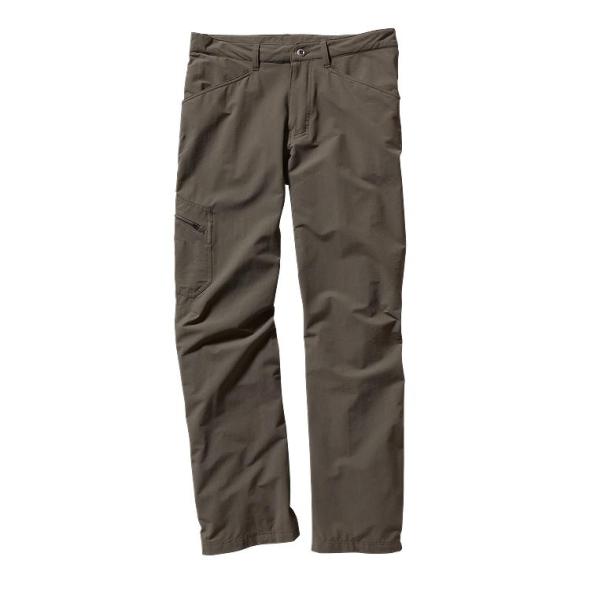 My favorite outdoor pants, period.  A little stretch woven into them so they move well, they dry fast enough, and the cut is good.  I suspect I could find a slightly cooler pant for 80+ degree temps (the Patagonia Gi III pant looks appealing), but these have done well enough so far.  I pair them with a synthetic boxer brief (most of what Target sells seems to do just fine versus more expensive name-brand offerings I’ve tried).  Fast drying, they eliminate chaffing, and briefs are great for swimming when one needs to be modest.

I’m looking into the possibility of palmless sun gloves to take care of the hand issue.  While it may sound like overkill, sunburned hands and fingers have been pretty common- and annoying.

As for eye protection, I typically use my Ray Ban Wayfarers or any other typical UV protection glasses, but plan on getting something darker and more full coverage for this summer, likely the Julbo Tensing (so far as I can tell, some of the most reasonably priced dark mountain glasses).  Time to get more serious; my eyes are pretty sensitive to brightness, I’ve already developed early stages of surfer’s eye, and I would like to avoid cataracts in old age.

While t-shirts, shorts, and the wind on bare skin feel pretty damned good, I ultimately think full coverage is the far more sustainable (and simple) way to go; less sunscreen on me, less sunscreen in pristine water sources, less consumables to pack.  Fashion be damned, practice what will keep you outdoors and healthy into old age.